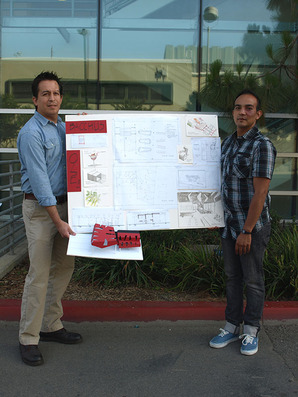 "Reflection on the Competition" By Pablo Onate
"I believe success is a large cake that is eaten in small bites. Winning the AIA's 1:2 was a mean mouthful, however! It took time to digest the mere idea of winning such a great competition, especially because it was ELAC, a community college that came out victorious for the second time over eleven prestigious universities. If I could pin point what made us win, I would say that it was the fact that we went into the competition with the state of mind that we had already won. Having been chosen by our teachers among our very talented peers was a victory of its own. So when we went in there our objective was simply to compete, give our best, and specially, have fun. This state of mind, together with the fact that Bernardo and I made a great compliment to each other, yielded great results. We wanted to simply make it to the six finalists that got to present; sixth place would have done! Once we were placed on the top six, however, the rest was left to the stars... and the stars aligned indeed!
The 1:2 was a one-in-a-life-time experience. It pushed us to our very boundaries, testing everything we have learned as students of architecture. Our design, drafting, drawing and presentation skills were all challenged and highlighted by the competition. The real triumph goes to all of those who have influenced us as students, however. It was Newton who said once, "I can only see far because I sit on the shoulders of giants". It is thanks to our teachers (past and present), to our peers, and our friends and families who have influenced us through time that this victory is possible. You are all the true victors of this competition. We just get to keep the ten grand = )."

"Reflection on the Competition" By Bernardo Rubio
"I was honored to be selected in alliance with Pablo Onate to represent the ELAC Architecture Department, in the Los Angeles Chapter of the American Institute of Architects, Interior Architecture Committee, for the 20th annual 1:2 Student Competition held at the offices of ZGF Architects LLP.
Fortunately after six hours of continuing work and effort of our team coordination, we embody our knowledge acquired during our pass thought the ELAC Architecture Department Faculty, and we were selected among the six best projects out of twelve. After one hour of preparation and gathering information to present our project to the jurors, we presented it to the jurors and audience. When the jurors reached their decision and gave us the result of their deliberation, Pablo and I heard our names being called out and announced that we had won the first prize, it was one of my best nights of my life. I would like to thank the whole ELAC Architecture Faculty, and our advisor Ramon Ramirez."